Dakar 2017 drew to a close in the Argentine capital of Buenos Aires, after Stage 12 of the world’s toughest motor race. The event, run over thirteen days in Paraguay, Bolivia and Argentina, saw three SA-built Toyota Hilux race vehicles finish in the top 10.

It was an up-and-down event for Toyota Gazoo Racing SA’s Giniel de Villiers and navigator Dirk von Zitzewitz (#302), who trailed Stage 12 winner, Sebastien Loeb (Peugeot) by just 30 seconds on the final stage of the event, posting the third-fastest time of the day. In the end, this was more than enough to hold off Orlando Terranova (MINI), who mounted a late charge to challenge De Villiers/Von Zitzewitz for their fifth position in the overall standings on Stage 11.

“We knew ‘Orly’ was close, and we both raced as hard as we could on Stage 11,” said De Villiers after completing the gruelling race in Buenos Aires. “But I ended the day holding onto a small advantage, and on Stage 12 we managed to extend that and retain our fifth place overall.” 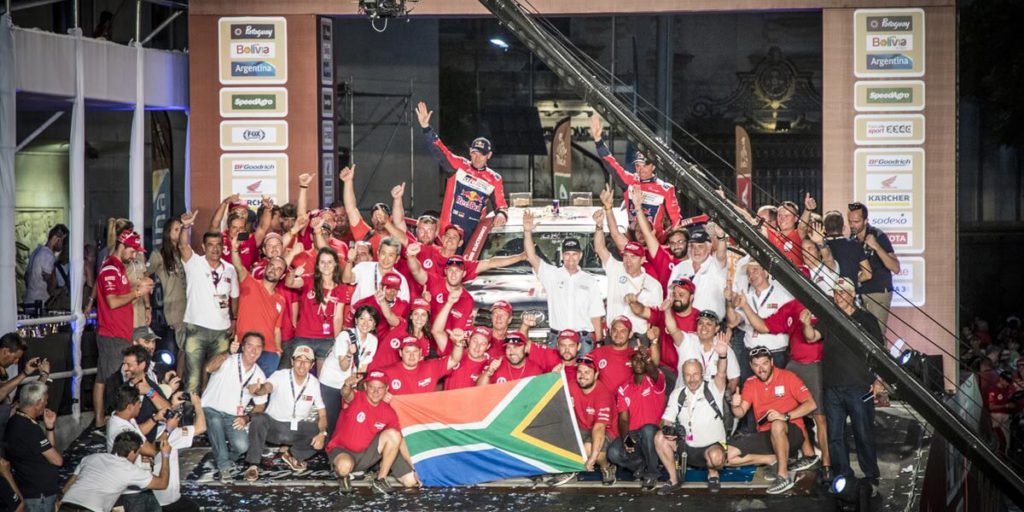 Toyota Gazoo Racing SA started the 2017 edition of the iconic motor race with a charge. Qatari driver Nasser Al-Attiyah and French navigator Mathieu Baumel won the short opening stage of the race convincingly, while De Villiers/Von Zitzewitz recorded the fifth-fastest time on Stage 1. This set both crews up perfectly for the first true Dakar stage.

Stage 2 brought the expected fireworks, with Al-Attiyah/Baumel leading the stage for extended periods, before settling for the second-fastest time on the day. De Villiers/Von Zitzewitz maintained their position, finding their stride and giving the Toyota Hilux a great outing.

But then came Stage 3, and massive disappointment for Toyota Gazoo Racing SA. Al-Attiyah/Baumel started the day with vigour, and set the pace through most of the long and tricky stage. They looked set to record a second stage win for Toyota on Dakar 2017, but the Dakar gods had other plans. The Qatari driver ran wide near the end of the stage, and a jagged hole on the side of the road ripped the right rear wheel from car, severely damaging the suspension in the process.

“We are bitterly disappointed,” said Toyota Gazoo Racing SA Team Principal, Glyn Hall, at the time. “but in the end there’s nothing we can do. Nasser pushed as hard as he could, and we were very happy with the performance of our Toyota Hilux. But this is the Dakar, after all, and these things happen.”

With Al-Attiyah/Baumel out of the race, all attention shifted to De Villiers/Von Zitzewitz, as well as fellow Toyota crew Nani Roma and navigator Alex Haro (#305). But Stage 3 also brought disappointment for De Villiers, who last won the race in 2009.

“The stage was tricky from the start,” explained De Villiers, “and we lost a little bit of time with navigation in the beginning. But then we knuckled down and got on with the job at hand, taking back time bit by bit.”

The plucky Stellenbosch boy was putting in a solid performance until a fuel pressure problem halted his charge. De Villiers/Von Zitzewitz were forced to stop and work through the problem, eventually losing the best part of thirty minutes in the process. This tumbled them down the order, and it was an uphill battle from there.

“But Giniel and Dirk are fighters, and they simply put their heads down and carried on,” said Hall of their performance. “In the end they finished the race in fifth place, after fending off a hard charge from MINI’s Orlando Terranova on the penultimate stage.”

“Dakar 2017 will be long remembered for a variety of reasons,” said Hall after the race. “The extreme weather certainly played a massive role, with stages cancelled and modified, reducing the competition’s overall race distance significantly.”

At the same time, the extreme altitudes of the Bolivian Altiplano counted against the normally aspirated Toyota V8 engines, and route director Mark Coma’s latest route truly tested the navigators as much as the drivers.

“To us at Toyota South Africa Motors, taking part in the Dakar is the ultimate showcase of the legendary reliability and toughness of the Toyota Hilux,” explained Calvyn Hamman, Senior Vice-President of Sales and Marketing at Toyota SA Motors.

In addition to the three Toyota Hilux vehicles in the top ten, 24 other similar vehicles completed the race – more than any other manufacturer. 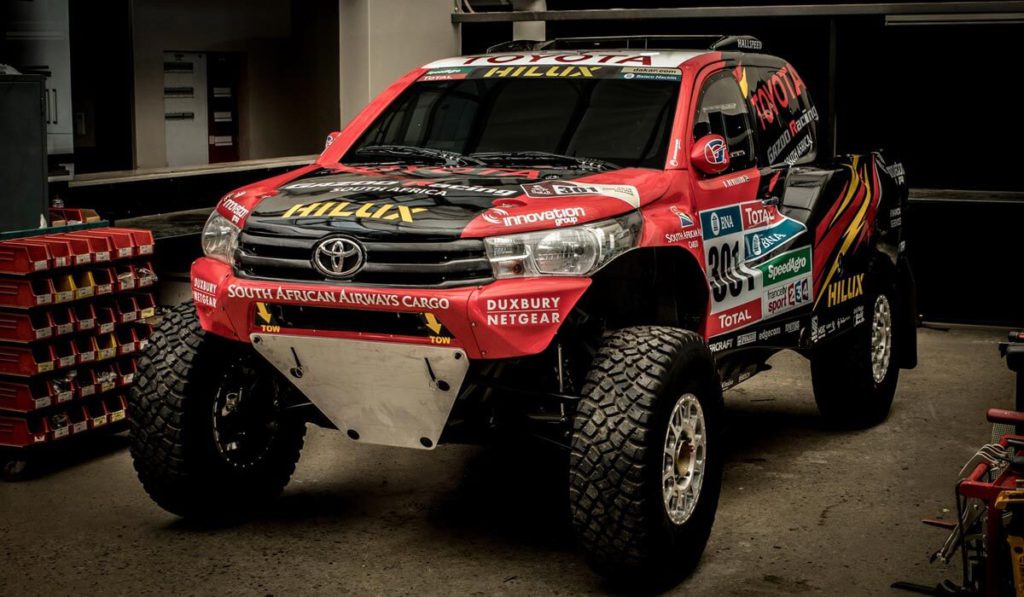