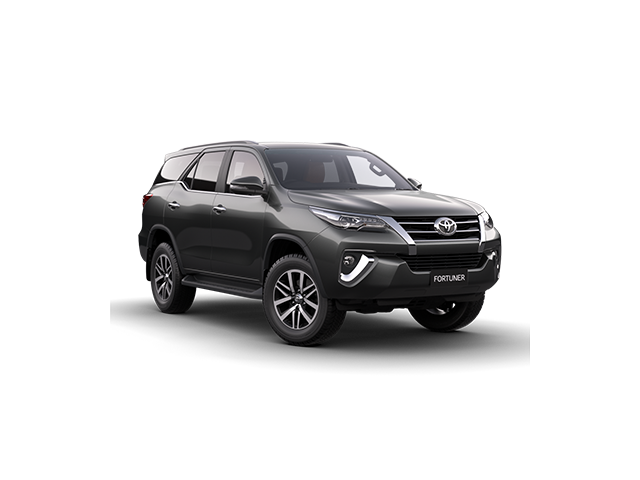 *Terms and Conditions apply. Images used are for display purposes only and may not reflect the exact vehicle specification. Please enquire with the sales executive.
CLICK HERE TO ENQUIRE

Introducing the 2020 Toyota Fortuner 2.8 GD-6 4x4 Epic Auto, Lead the way and save with CMH Toyota

MORE ABOUT THE TOYOTA FORTUNER


We all want and love freedom, or at least the idea of it. But what exactly is freedom? In short, it’s whatever we want it to be – enjoying life without inhibitions. It’s the ability to go anywhere you like, whenever you want. That’s the true luxury of freedom – and this is embodied in the new Toyota Fortuner. The origins of the Fortuner are interesting. It dates back as far as 1984, when a midsize SUV called the Hilux Surf was introduced and sold to selected markets, including Brazil, Australia, New Zealand, the United Kingdom, Pakistan and Afghanistan. Two decades later, a much more refined design with similar underpinnings to the Hilux Surf was introduced as the Toyota Fortuner to more than 110 markets in 2005. The first-generation Fortuner was launched in 2006 in South Africa and soon became the SUV of choice for bush and urban lifestyle enthusiasts alike. The new Fortuner has a long, wider stance versus the outgoing model, and its capabilities to adapt into every environment like a chameleon have been reinforced. It can transform seamlessly from a sophisticated urban warrior to a fierce bush conqueror. Some of the highlights of the new Toyota Fortuner include new-era diesel engines and power train with improved performance and with refined 6-speed manual and auto transmissions. Improved on- and off-road capabilities with new-era frame and suspension. 4WD electric switch (4x4 models), Active Traction Control, Hill-start Assist Control and Downhill Assist Control (4x4 models). Increased levels of ride and comfort with reduced NVH and of course a totally new and premium feel interior with improved tech such as smart entry, power tailgate (4.0 V6) and 7” touchscreen audio (selected models). There is enhanced versatility with ample storage space and with space for seven occupants, with one-touch seat stowage 2nd and 3rd row. New Fortuner includes class-leading safety and security with a new-driver knee airbag, speed-sensing auto door locking, new anti-theft system, ISOFIX anchorage points and a new Trailer Sway Control (TSC) system. The peace of mind that the new Fortuner offers is reflected in the these improvements over the outgoing model, which in itself has become a South African motoring icon. The new model is set to further distinguish itself atop the competitive midsize SUV market.

Vehicle pricing and extras are subject to change without notification. The seller and the advertiser will not be bound by inadvertent and obvious errors in the event that images, prices and details displayed on this website are incorrect. No two vehicles are exactly the same, therefore specs are based on averages and are merely indicative so should be viewed on the basis of probable rather than definitive. Please confirm that all details displayed on the website are correct with the seller before purchase.